Over the years, there were many books and studies regarding marriages, some of which included predictions about a success relationship between the partners. Having money, children or spending enough time to know each other before getting married seemed to be important factors that could decide the outcome of a married couple. But there is another factor that’s usually overlooked about many people hasting to get married: the age difference between spouses. Randy Olson is a researcher that managed to create an algorithm from a large study that showed couples divorce risk depending on the age difference between partners.

The study analyzed 3,000 young married couples in the United States and it used a multivariate model to estimate the aspects that appeared to best foresee the marriage’s probabilities of accomplishment.

Olson designed the following graph, depicting a bold and somehow hard-to-miss conclusion: that the risk of separation increases along with age difference. 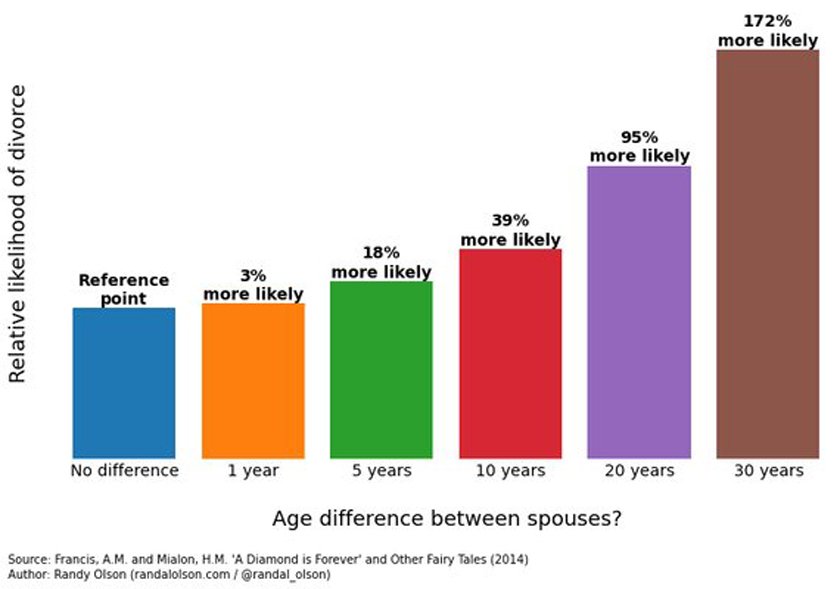 According to the chart, if there is a a difference of one year between the two partners, they will experience a 3% risk of parting comparing with the case when both partners are having the same age. A scenario where there is an age difference of five years between the spouses is equivalent to a 18% higher risk of divorce, and if the partners are 10 years apart then they will experience an increase of the divorce risk by 39%.

Of course, if the age difference is greater, let’s say 15, 20 or 30 years, the risk of a failed marriage is getting even higher, increasing by 172%, which means that it’s almost certain that a divorce is in sight. Obviously, this is only statistics and you should not make such an important decision based on numbers, but it’s definitely something to be taken into consideration. I know many couples where the age difference is considerable and they are very happy with their decision to get married.

It is factual that a large age between partners could mean a different life experience and maybe a different mentality, but it’s all about each partner’s character. Hey, didn’t you that age is just a number?