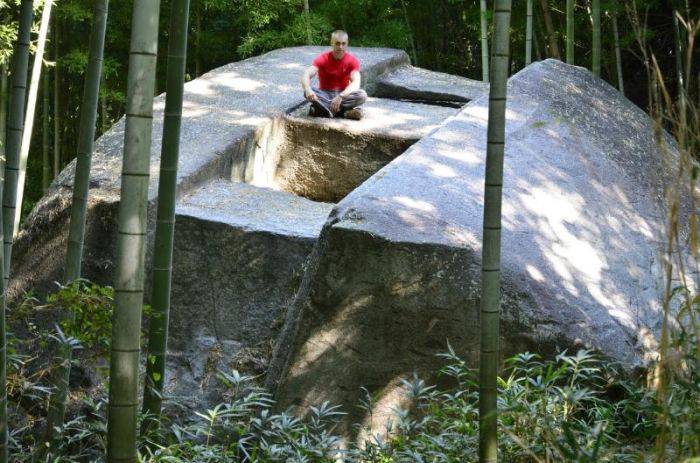 The village of Asuka, located in Nara Prefecture, Japan is a very interesting land from a historical point of view. It has its origins in the period called Kofun jidai (250-552), which means “period of ancient mounds”. This era of Japanese history is characterized by a certain type of funerary mounds built in many places at that time; more precisely, mounds of earth in the shape of a keyhole, surrounded by ditches.

One of the most special features of Asuka is the numerous granite stones carved in special shapes in different parts of the region. The largest and most unusual of the carved stones is the Masuda-no-iwafune (“Masuda Stone Ship”). 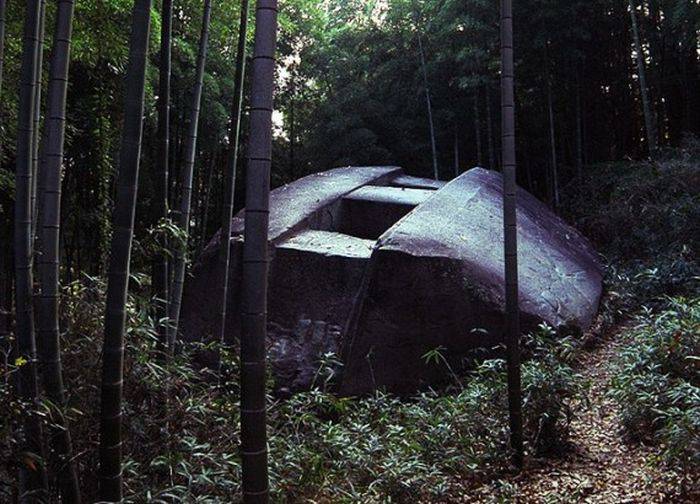 The stone sculpture, located near the top of a hill in Asuka, is 11 meters long, 8 meters wide and 4.7 meters high and weighs about 800 tons. The top has been completely flattened and there are two holes of one square meter carved in it and a prominent ridge parallel to both holes.

At the base of the stone are lattice-shaped depressions, which are believed to be related to the process used by builders to flatten the sides of the rock, according to Ancient Origins.

What is the nature of this stone and what is its purpose? Who did it, when and why? Unfortunately, there are no answers to these questions, but many theories have been put forward to explain this unique and unusual structure.

There are many Buddhist temples and altars in the region where Masuda no iwafune is located, which may suggest that the sculpture was made by Buddhists, perhaps for a religious or ceremonial purpose.

However, Masuda no iwafune does not resemble the style or construction of any other Buddhist monument. Another suggestion comes from the name of the rock itself, which translates to “Masuda’s stone ship.” 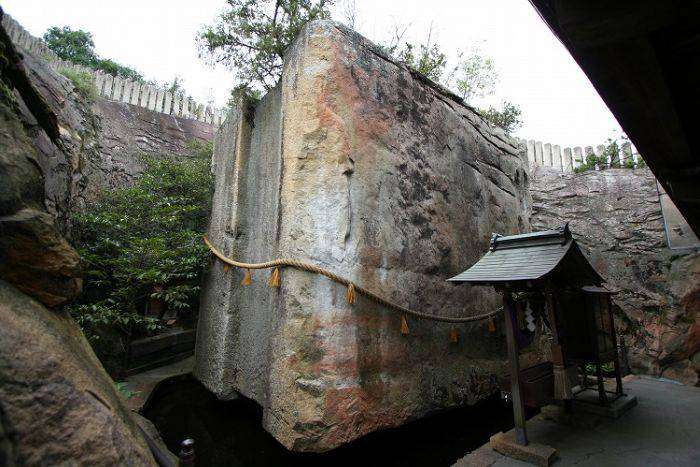 It has been suggested that the stone was carved in commemoration of the construction of Lake Masuda, which was once nearby (now drained, the site being part of Kashiwara).

Another popular theory is that it was used as an astronomical observation point. Proof of this perspective comes from the longitudinal ridge line, which is parallel to the ridge of the Asuka mountain and aligns with the sunset on a certain day of the year called the “spring doyou entrance”.

This day was important in the monthly calendar and for early Japanese agriculture, as it signaled the beginning of the agricultural season. However, this perspective has largely been rejected by researchers who do not recognize it as an ancient astronomical observer.

Some historians believe that the rock is just the remains of a tomb designed for members of the royal family. However, this assumption does not explain all the unusual features, such as the square holes at the top. In fact, no human remains were found nearby which pose another question.

To explain the nature of the square holes, some suggested that the stone should have been the entrance to a tomb, but that the work would not have been completed. Interestingly, Masuda no iwafune bears a resemblance to another stone block in Japan, the Ishi-no-Hoden megalith, which is located in the city of Takasago.

The Ishi-no-Hoden megalith resembles a cube about 5.5 meters long and has similar notches, but no visible holes – although some suggest that they are under trees that have grown on the rock. Today, Ishi-no-Hoden is a shrine dedicated to the Shinto god Oshiko Jinja, but no one knows who built it and why.

Very little is known about the Masuda no iwafune stone sculpture, and evidence of who built it and why is completely lacking. The fact that there are so many stone structures in the area suggests that the region was inhabited before the period of the old mounds, but it should be emphasized that there is no evidence to support this theory.

Under these circumstances, the true origin and purpose of these enigmatic relics of ancient Japan may have been lost forever in the mists of history.