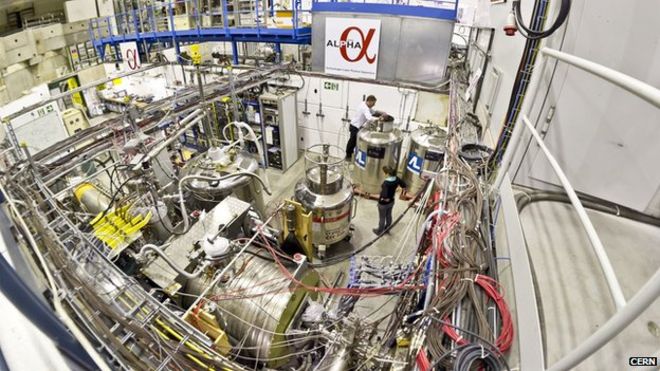 Physicists at CERN have reached to an incredible discovery: they saw for the first time a piece of antimatter. The experiment took place in the ALPHA project at CERN and the research was published in Nature magazine. In the experiment, physicists aimed to observe the differences and similarities between matter and antimatter. In their test, the researchers used a laser to measure antihydrogen, the antimatter counterpart of hydrogen. Antimatter is very difficult to observe because it destroys almost instantly, so the physicists have used a strong magnetic “trap” in order to “catch” it.

“Using a laser to observe a transition in antihydrogen and comparing it to hydrogen to see if they obey the same laws of physics has always been a key goal of antimatter research,” said Jeffrey Hangst, spokesperson of the ALPHA collaboration.

Of these, only 14 have been “caught” by the magnet trap and exposed to a laser beam at a unique frequency. Then, the scientists have managed to measure the interaction between the laser beam and the antihydrogen atoms. Starting from this foundation, the men of science are aiming to refine their measurements of antimatter, thus trying to resolve one of the biggest mysteries in the universe: why matter outweighs that amount of antimatter in the Universe?