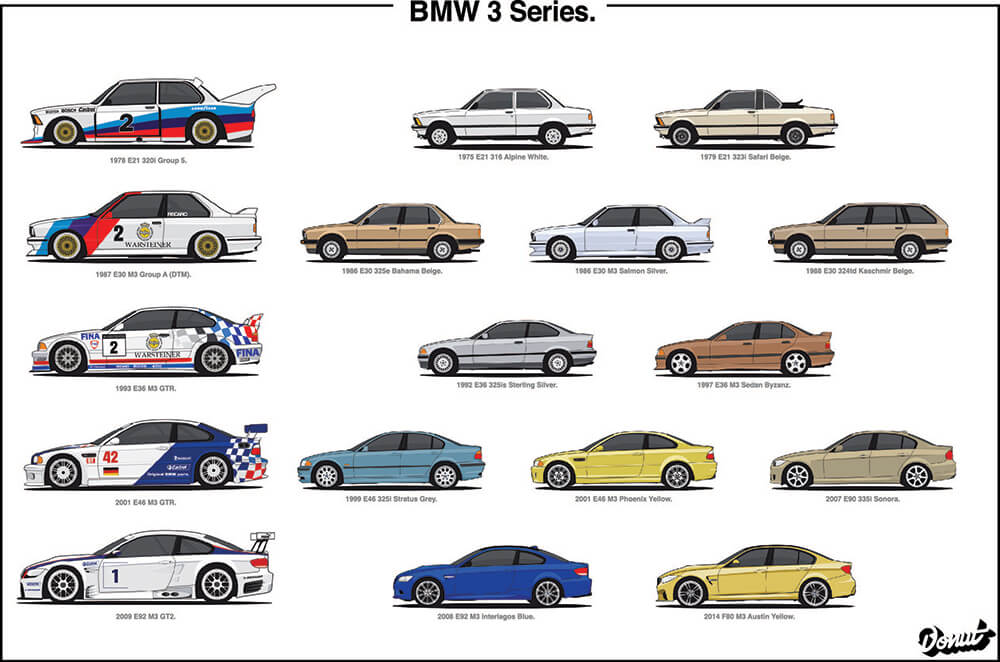 The Evolution of the BMW 3 Series is a video animation created by folks at Donut Media and it beautifully captures the evolution of this car over the years, starting with 316 Alpine White from 1975 and finishing with F80 M3 Austin Yellow from 2015. For every car in the video you can see the main features and what’s new compared to previous models.

The Evolution of the BMW 3 Series

You should know that the 50s BMW was very different from the company we know today. The sales volume was represented by the 12/13/19.5 hp model called Isetta and BMW 700. At the time, the company suffered serious losses caused by the luxury cars they were struggling to export to the US. In this context, some decisions were essential for turning a bankrupt company into one of the most successful car corporations in the world.

In the early 1960s, after a period of financial difficulties, BMW reorganized itself with the financial support of the Quandt family, which became a major shareholder. The company prepares its first large-scale market study identifying an optimal market segment for development. The answer was simple: cars with sport performances but at a price that’s under dedicated sport models. This is how the foundation for modern BMW line-up was born, along with BMW 1500, the BMW 1800 and the BMW 200.

At the time, Wilhelm Hofmeister defined many features we find in modern BMW models: the short-sleeved body, the longer hood and the rear-fitted cabin, the rounded headlamps in the grille, the Hofmeister curve of the C-pillar, the horizontal media line that gives dynamism to the bodywork. These particular features remained constant on all BMW models ever since!

The idea of a smaller, more agile sports sedan camed from Max Hofman, the man who owned the BMW importing company in the USA. Thus, at the 1966 Geneva Motor Show, the BMW 1602 is launched and it establishes the base of the ’02’ line(including the BMW 1802 and BMW 2002), the predecessor of the BMW 3 Series.

Nine years later, at the La Frankfurt Auto Show in September 1975, the first generation of the BMW 3 Series was launched. It also features an important design feature that would then define the brand’s designs: the driver-facing board. Two years later, in 1977, the BMW 3 Series became the first available model with a six-stroke engine. There is a long series of innovations, including engine injection and management systems, all-wheel drive, advanced diesel models, lightweight materials such as aluminum or magnesium. The BMW 3 Series also featured the BMW M3, the model that has proven to be the most successful touring car in history. First generation of the BMW M3 registering over 1500 wins in various racing events around the world. I want to let you know a bit of trivia here. A BMW 3 Series 320d (e46) was to be the first diesel car to achieve a major success on a 24h circuit race: the victory in the Nürburgring 24h race in 1998.

The second generation BMW 3 Series came with a four-door sedan. Along with this occasion, the first M3 cabrio is launched. As a result of a side-project developed by an engineer, the “Touring” version is also released. The third generation launches the “Compact” version to anticipate the BMW 1 Series.

After six generations of developments, the BMW 3 Series is available in Sedan (F30), “Touring” or “Sports Wagon” (F31), Gran Turismo (F34). The Coupe and Cabriolet versions have been assimilated to the BMW 4 Series.

After reading the article watching the Evolution of the BMW 3 Series video, which one is your favorite? Let me know in the comment section below.