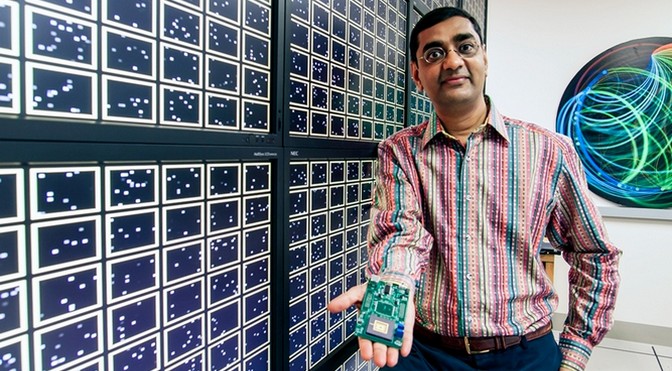 Back in 2008, scientists at IBM started working on DARPA’s Systems of Neuromorphic Adaptive Plastic Scalable Electronics (SyNAPSE) programme. In the meantime, they’ve managed to develop TrueNorth, a computer chip that can perform 46 billion synaptic operations per second. The chip uses silicon technology and it is based on non–von Neumann architecture. According to its developers, the chip was created by using a Samsung 28nm process, it consumes just 70 milliwatts of power and it is extremely efficient, flexible and scalable. Also, just like the human brain, it has parallel, distributed and modular architecture that can take technology as we know it to whole new levels.

Are you ready for some numbers? Well, the TrueNorth chip embodies 5.4-billion-transistors with 4096 neurosynaptic cores that are linked via an intrachip network. The network integrates 1 million neurons that are programmable and 256 million synapses that are configurable, being the largest IBM chip in terms of transistor count. As I mentioned above, it is scalable, so those numbers can increase according to the needs of the project.

During the test simulation of complex recurrent neural networks, the chip consumed less than 100mW of power. Dharmendra Modha from IBM said that “…TrueNorth completely redefines what is now possible in the field of brain-inspired computers, in terms of size, architecture, efficiency, scalability, and chip design techniques.”

If the chip proves to be reliable, it can be used in many types of applications, including multi-object detection and classification.