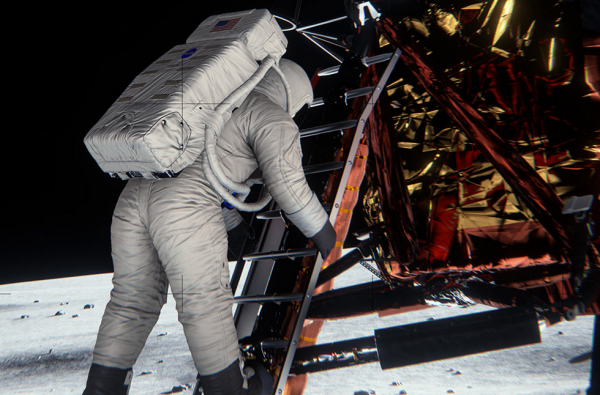 According to many people all over the world, man has never set foot on the moon. Although this may look like a ridiculous statement to make, there are countless theories and so-called proofs that what people saw on TV was not the actual Moon landing, but an elaborate hoax filmed in a studio by the one and only Stanley Kubrick, the man that redefined the Sci-Fi genre with his 2001: A Space Odyssey, a revolutionary movie that was released one year before the Moon landing.

NVIDIA thought it would be a great idea to use their technology in order to disprove some of these theories. Using the Unreal Engine 4 and the GTX 980, they managed to recreate the textures, movements and the lights of that event.

For example, in the original photos, conspiracy theorists argue that Buzz Aldrin can be seen in an image, although he is located entirely into the shadow of the module. Using advanced lighting techniques that mimic the real world, NVIDIA proved that it Buzz could have been visible in that particular position, since the sunlight was reflected from the surface.

I’m sure that NVIDIA is just using this demonstration as a mean to promote their product and technology, but it’s interesting to see that there is an actual explanation for all those strange things in the video footage that were noticed by people over the last decades.