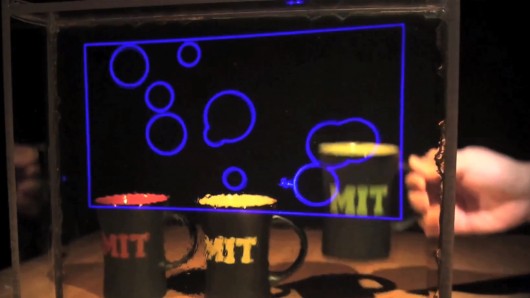 There are infinite applications for transparent displays, and the first one I can think of is to create transparent smartphones. But that’s not all. If transparent displays will be available for cheap, they could be implemented in a large number of applications. For example, a transparent display can be used to show traffic and important information regarding the system on the windshield of a car or an airplane. It can also be used in public places to show offers, or to display various data that’s important for the client.

The transparent display technology has already been developed, but its use is still too uncommon, particularly because of the high manufacturing cost. This is probably the reason why the MIT scientists have embarked on a journey the design a new type of transparent display that’s much cheaper to produce, which would also be more compact and it will have a better viewing angle.

The new technology uses nano-particles (reflected in the glass) rather than diodes. As you will see in the following video, the system allows the viewer to experience only the monochrome images or text projected on the glass, the rest being completely transparent. So far, the technology uses only the blue color, but the researchers think they can implement additional colors (red and green), so we can hope for future transparent displays that will be able to reproduce high quality color images.

This project is far from completed, but it brings a new hope for the gadget industry. Also, in few years we may see it implemented in automotive, advertising, high-tech industry and even medicine and.