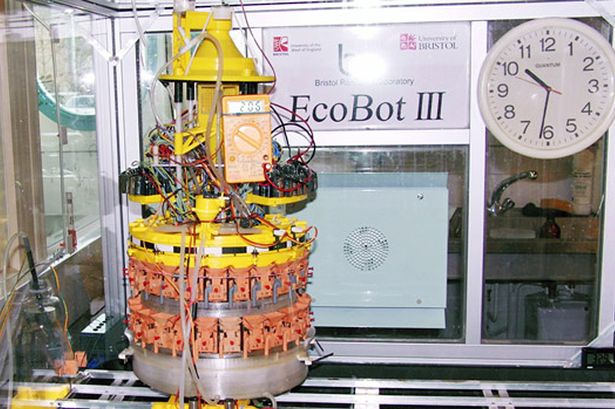 This bold idea could become the foundation for an actual technology thanks to a team of British researchers. Robots and robotic systems are useful to us humans, some will even say that they are extraordinary in helping us with industrial and home tasks, saving us a lot of time. But they have a huge negative side – they use a lot of electricity. The group of researchers from Bristol Robotics Laboratory in England have come up with a revolutionary and maybe strange idea that could change things in our technological world. If it will get implemented, we could see a dynamic system powered by human waste that could provide useful energy for the future generation of robots.

The energy system called EcoBot III uses a pump to mimic the function of the human heart that boosts the flow of liquid. The system feeds a Microbial Fuel Cell (MFCs) that can convert the urea based liquid into electricity. Such biological fuel cells contains microorganisms, just like the bacteria in the human digestive system and just like those cells used in wastewater treatment plants. As they digest the debris (urea based liquid), they produce electricity.

The most interesting part about the system is the pumping section. It is constructed from a memory material that can return to its original shape after being deformed. The body of the pump is compressed, forcing the urea fluid to flow to electric cell. After performing this action, the pump will relax, following the same principle found on human myocardium. The pump itself uses electricity, but much less than the electricity produced by these fuel cells.

The main idea of this project was to develop an autonomous device that uses the waste from the environment to create energy, at the same time getting rid of its own waste. Although this discovery could lead to viable electricity generators for robotic device, the system needs a lot of testing and tuning before seeing mass production. For now, the amount of electricity produced with this technology is sufficient to power a single LED. But the research continues…