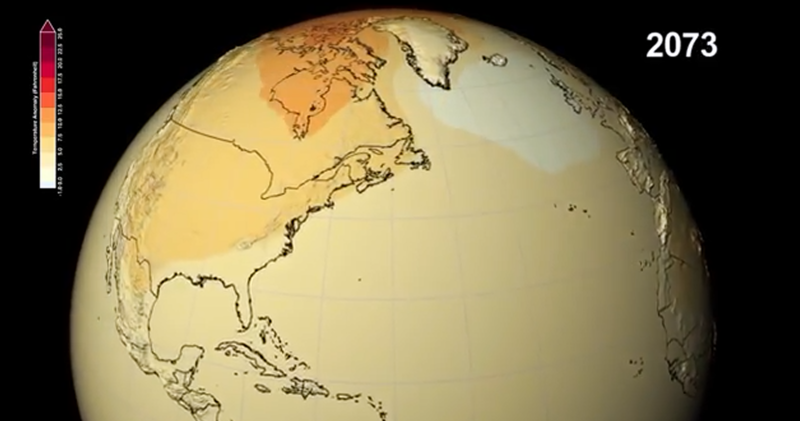 The National Aeronautics and Space Administration, best known as the NASA just posted a video on NASAexplorer’s Youtube account with a climate simulation for the next 87 years, until the year 2099. Based on the current climate models and the current trends, NASA was able to predict that temperatures and precipitation will change drastically by the end of 21st century.


According to the climate change simulation created by NASA Center for Climate Simulation and NASA’s Scientific Visualization Studio at Goddard Space Flight Center, Greenbelt, Md., in the next 87 years humankind could face dramatically changes in terms of temperatures and precipitations. As everyone expects, through·out 21st century the temperature levels will increase because of the greenhouse gas levels. In the video simulation, the CO2 concentration will increase with 270 parts per million in the following 87 years, reaching 670 ppm by the year 2100.

This is not the only study in this regard, other scientists have shown that human activity has caused a global temperature rise of the past century that is unprecedented in human history. Many similar predictions state that if humanity does not take any measures to ameliorate this phenomenon, the temperature will increase up to 6 degrees Celsius by the end of the 21st century. The dangerous increase in temperature brings not only the threat of natural disasters, but also conflicts between world powers for Earth’s resources.

As a result of dramatic climate changes, the world of our grandchildren is expected to be much different from that in which we live.