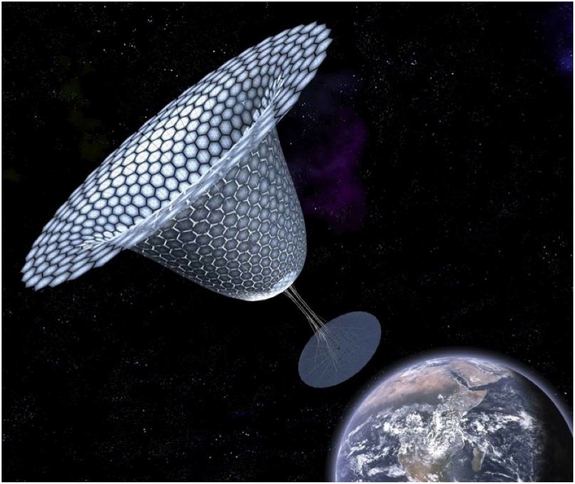 Ever since electricity was discovered, humans have permanently tried to invent and use green methods of “harvesting” it. Solar power,  wind power,  hydroelectricity and geothermal power are only a part of Earth’s sources of energy. Now, a former NASA engineer is working on a method that could produce 1/3 of Earth’s total energy.

As you know, the solar energy that’s available in space is many times greater than the one we experience on our planet. So far, the problem was not capturing that energy but rather transporting it back here. John Mankins is the man in charge of finding a way to use the solar panels in space, collecting the energy and sending it back to Earth. Mankins’s team has designed a prototype satellite called SPS-ALPHA (Solar Power Satellite via Arbitrarily Large PHased Array) which has the form of a cocktail glass and is made of thousands of solar panels. According to his calculation, one such satellite is able to supply a third of total energy needed by humans.

According to Mankins, the solar panels of SPS-ALPHA will capture the solar energy, then it will send that energy back to Earth in the form of microwaves. The scientist believes that if the project will be a success, it will make possible the construction of large platforms with thousands and thousands of elements that can ultimately produce thousands of megawatts.

The main advantages of this satellite over the ones used in the past is that it eliminates the need for a large integrated power management and it can be assembled from lightweight elements (110 to 440 pounds panels). According to Mankins, the new satellite is a “biomimetic” approach to the challenge of harvesting space solar power.

Skeptics will say that this type of technology requires a double conversion (photon – electron – photon/microwave – electron) that will greatly reduce the efficiency of the process and a lot of energy will get “lost in translation”. It seems that Mankins has taken that into consideration, and he explains everything in his Mankins’ final report on the SPS-ALPHA. Depending on the funds gathered for this project, we could see an actual launch in space by 2025.

What’s your take on this subject? Is Mankins’ project feasible?