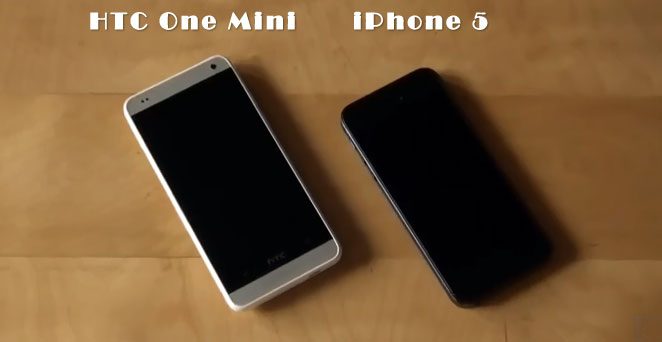 Every year, we see new smartphones released that have better specs, better camera and better display than the previous models. This article presents a short comparison between the mid-range HTC One Mini smartphone and Apple’s current flagship device, iPhone 5, in terms of body, hardware, software, camera and price. While I will try to answer the question “Is HTC One Mini better than iPhone 5?” I will provide every possible fact that will help you find your own answer to that question.

Case
Even though HTC One Mini is advertised as a “mini” phone, it’s still larger than iPhone 5. Both devices have aluminum casing on the back and glass on the front. HTC One Mini has plastic around the edges, and two inserts on the back. While the iPhone 5 is more square on the edges, the One Mini has a curved design that makes it feel better in hand. I like the iPhone’s design more. I think it’s more solid and so far HTC proved to be sensitive on dropping tests. 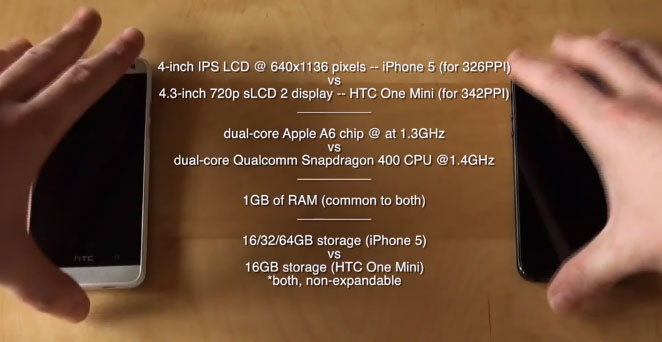 Display
As I said in the beginning, the HTC One Mini has a larger display (4.3” 720p sLCD 2) compared to iPhone’s (4” IPS LCD). HTC tried to use a sharper 16:9 display with a pixel density of 341 PPI, while the iPhone 5 has 326 PPI. So, in terms of display, the resolution on HTC One Mini display is slightly better than the one on iPhone 5.

Memory
This round is won by iPhone, because HTC One Mini features only 16GB of storage (non-expandable), while the iPhone 5 is available in 16/32/64 GB of memory (depending on the price). 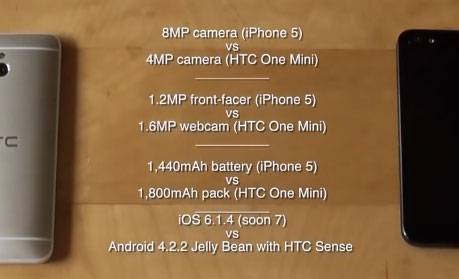 Camera, battery, OS
HTC One Mini features a 4MP UltraPixel main Camera while the iPhone 5 features the 8MP main camera. I was not convinced by the UltraPixel technology, and I truly believe that iPhone 5 delivers better, sharper and noise-free photos. Although the One Mini packs a larger battery (1,800 mAh) the tests say that iPhone 5 will probably last longer during the day with its 1,440 mAh battery. In terms of operating systems, we are seeing the classic “battle” between iOS and Android.

Performance
Both devices are fast, but most apps start slightly faster on iPhone 5. Again, the overall experience when using both phones is greatly influenced by their operating systems. If you are not biased in any way, you will probably enjoy the fluid Android Jellybean more, since most reviewers believe that iOS 6 is flat and conservative.

Price
The estimated price for the HTC One Mini is around $590, while the iPhone 5 can be found on Amazon for $690. Even though iPhone’s price will get lower once the iPhone 6 is release, I still think that it’s going to cost more than One Mini (at that time).

Conclusion
Before I buy a new smartphone I usually try to establish what I’m going to use it for. Since both smartphones have comparable performances in terms of overall using experience, I will have to draw the line in terms of battery and camera. iPhone 5 captures better pictures, and according to most reviews, the battery will last longer. If you want a phone on a tight budget, the smartest choice is probably HTC One Mini.