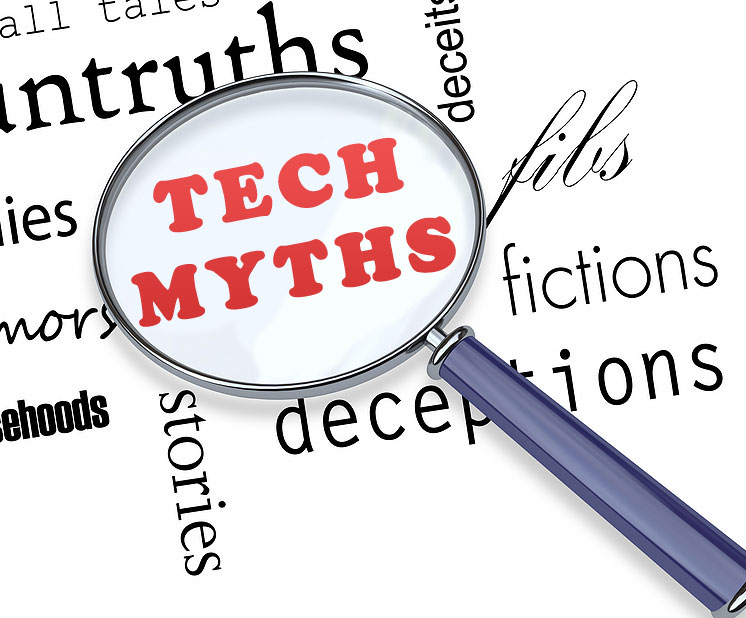 Many technological myths spread quickly among those who are not willing to check their veracity, and some are truly everlasting, even if they are completely wrong. Here are five technology myths that have resisted over time, influenced by older technologies and some strange habits of users.

1. Public Wi-Fi networks are secured if they have passwords

Public Wi-Fi’s Password is not an obstacle for hackers, and if they have the password they can easily monitor the network’s traffic, so the risks of them stealing your personal information is pretty high. If you are connected to such networks, you should not perform online shopping and online banking. You should also be careful if you access social networking via such public Wi-Fi networks.

2. The value of a software is directly proportional to the price

This technological myth could be valid in some cases, but there is so much software available on the market, it is impossible to create an overall rule that connects the price and the actual value of the software. Open-source developer community provides so many apps that are at least as good as the paid software, but at no cost. Examples like VLC Player, GIMP (an alternative to Adobe Photoshop) and Open Office shows that free software is of great value.

3. If you leave your gadgets to charge overnight, the battery could have problems

The new generation of gadgets can be left to charge up to 24 hours without any problems. Lithium-ion batteries are not affected by long charging time, and most gadgets have security systems that ensure the protection of the battery once it’s fully charged.

The quality of HDMI cable is one of the biggest unfounded technological myths ever. The difference between the cheapest and the most expensive cables is really negligible, so there is no need to buy an expensive HDMI cable when you can get one with the same quality at half the price (or cheaper).

5. The ISP can track everything you do on the Internet

There are many threats to privacy in the online environment, but most of them come from sites that keep track of visitor’s IP and the databases created by the secret service (in almost every country) even though these actions are currently confirmed only in U.S. and France. Theoretically, the Internet Service Provider has the tools to monitor each user’s traffic, but it does not have the necessary resources to do so. The expenses that could convert the ISP into a Big Brother that knows every move we make on the Internet are too high, even for U.S. companies.

Before accepting any technology statement as valid, you should take 2 minutes of your life and check the Internet for its veracity. Google is your best friend in such cases, and knowing the truth about tech myths could save you some money. Why pay a lot of money for something when you can get it at half the price or for free.