Tea bags can be dangerous to health, warns a study conducted by researchers at the University of Derby. According to their findings, the cheap tea sachets that are available in every supermarket may contain high quantities of fluoride that could affect bone structure and teeth integrity. 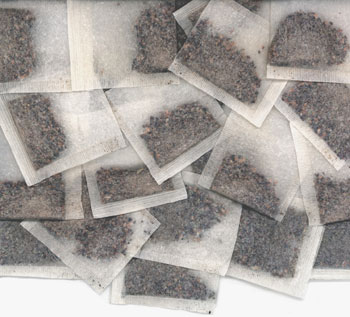 The study shows that a liter of such tea contains 6 milligrams of fluoride, which is 50% more than the recommended daily dose for humans. Normally, for a person, it is recommended to consume between 3 and 4 milligrams of fluoride per day. Ingestion of large quantities of fluoride can cause more health problems. When the teeth are affected, the effects could appear as grainy brown spots that are invisible to the naked eye. Also, the fluoride excess affects the bones and joints, weakening muscles and can cause gastrointestinal problems and osteoporosis. If we are to consider other similar studies, the exposure to the fluoride substance has been linked to bone cancer in men. In 1992, another study revealed that the risk of bone cancer was three to seven times greater in areas where the water was contaminated with fluoride.

Researchers at the University of Derby think that the tea manufacturers should print on the tea box label the amount of fluoride along with other nutritional information.