In light of recent news coming from MWC 2014, we are now in the position to compare the features of two of the best flagship smartphones of 2014: Samsung Galaxy S5 and Sony Xperia Z2. Both devices were released less than 24 hours away and they have have instantly captured the attention of journalists, bloggers and fans alike. Also, they gave Android fans good enough reasons to choose one camp or the other, since both devices are looking good, both have top specifications and features that are meant to differentiate them from the rest pack. All these being said, it’s time to break things down and try to answer the obvious question:

Which one is better?

In the late years, Samsung has become a giant that dominates the Android ecosystem. S4, the predecessor of Galaxy S5, was not received so well by critics, but that did not stopped folks from buying million pieces. In the other camp, Sony approached a different strategy. Their progress was slow, but steady. Xperia Z, Z1 and Z2 were released six months apart from each other, and most tech magazines praised the Sony Xperia Z2 when it was compared with the S5. Let’s see why…

In the past, there were many complaints regarding the plastic case of Samsung Galaxy. Fans will be disappointed to learn that the S5 features a 8.1mm thick plastic body, so it has a similar look and feel like the previous model, the S4. The plastic cover on the back has a perforated look that doubles as a cover for the charging port, thus allowing the S5 to be dust and water proof.

On the other side, the Xperia Z2 (8.2mm thick) has an OmniBalance design. Just like the previous model, the Z1, it has the same square edges and the glass looking face and back. The Z2 is waterproof and it allows the user to capture images under the water, using the dedicated camera button. Deciding just by this particular aspect, the Z2 is superior, since Galaxy S5 is not really suited for deep water submersion. 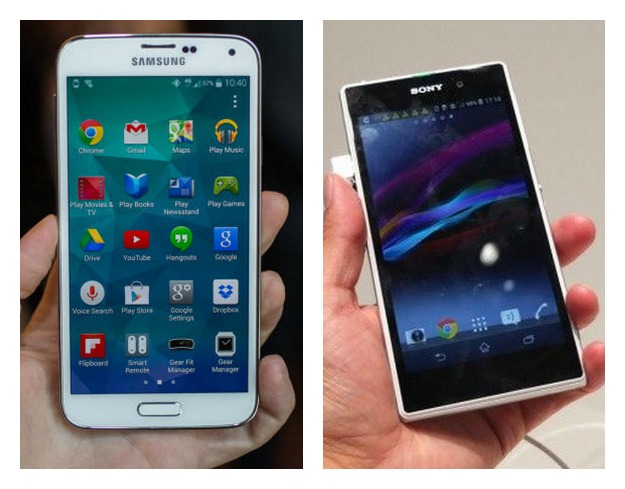 Z2 has a 5.2-inch Full HD IPS display that features the Trilluminous technology with a rezolution of 1920 x 1080 and a pixel density of 424 ppi. In order to improve the color quality on the display, Sony “borrowed” the Live Color LED tech from their Bravia TVs.

The differences between the two displays are small and both have their advantages and disadvantages. The Z2’s screen is better at color reproduction but the S5’s AMOLED has a superior contrast and the Ultra Power Saving Mode.

Both devices use the Qualcomm Snapdragon 801 Krait 400 quad core processor clocked at different speeds. From this perspective, the S5 is faster (2,5 Ghz) than Xperia Z2 (2.3 GHz), but Sony’s smartphone catches up in the RAM department, having 3GB of RAM versus the 2GB that’s packed on the S5. The graphics processors – Adreno 330 GPU – are identical. Regarding the battery, there is a catch. Although the Xperia Z2 packs a larger battery (3,200mAh) compared to the S5 (2,800 mAh), the S5 has the Ultra Power Saving mode that will extend the usage time even up to 24 hours on standby. These smartphones were just released, and further testing needs to be made in order to see how much these batteries last on common usage, but I suspect a better performance from S5.

Samsung decided to use the Apple’s TouchID concept and to add a fingerprint sensor with 3rd app support in the home button. Following the health trends, the S5 packs the S Health 3.0, heart rate monitor and the incorporated pedometer.

For me, the camera is an important factor when I decide to get a new smartphone. The S5 has a 16 MP sensor main camera (2MP improvement since the previous model) and a 2.0-megapixel front-facing camera. The main camera allows the user to capture images at the resolution of 5312×2988 pixels, the LED flash has autofocus, there is selective focus, HDR live, and 4K videos and slow motion feature. Samsung underlined the camera speed on their new device. It’s able to focus and trigger in only 0.3 seconds.

Sony offers 4K video recording as well, but the Z2’s camera has a larger sensor – 20.7 MP – (the maximum photo rezolution is 4128×3096 pixels) and the secondary camera has 2.2 megapixel. Additional features: stabilization, HDR, slow motion at 120 fps and a function that allows the user to take pictures while shooting videos. Until the decisive test can not issue opinions.

Another important aspect is the audio feature. The S5 has a mono speaker, while the Z2 has stereo speakers that should provide a superior audio experience.

Both devices have top-notch technology and features and although there are pros and cons for each one of them, the ultimate decision is a matter of taste. I loved the design of Z2, but the battery will probably last more on the S5, due to the Ultra Power Saving feature. Although the S5 has a faster processor, the Z2 has more RAM. The camera on Sony’s device has a larger sensor but the S5 promises faster focusing and triggering. For me, the Z2 is superior in many ways, but I guess we need to see few in-depth reviews on both devices before deciding which one is better.

Please check the reasons why Galaxy S5 is not that great and the Galaxy S5 vs iPhone 5S comparison.