According to geochemist Steven Benner, the professor who lead the study, we could all be Martians at origin. He declared that a mineral called molybdenum that’s essential in life occurrence appeared for the first time on Mars due to volcanic eruptions on the planet. Then, it was transported to Earth by meteorites blasted off Mars by the large eruptions that occurred there. 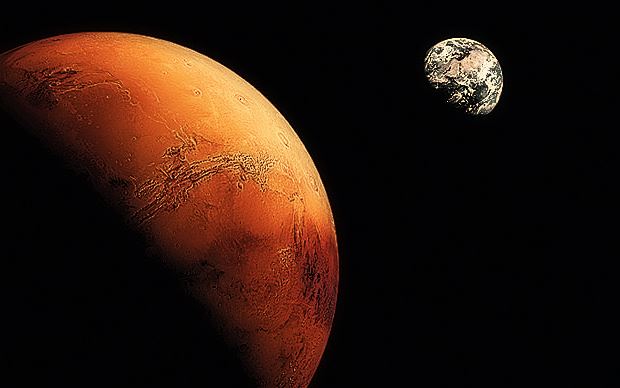 Steven Benner is a professor at the Westheimer Institute for Science and Technology and he believes that this element could not have been available on Earth when life sparkled (3.85 billion years ago) because the planet had not oxygen at that time. But Mars did, so it becomes the first planet to suspect of sending the crucial chemical element down here.

It is a known fact that organic compounds are the foundation for life, but they need other elements in order to spark life. Adding heat or light is not enough. Benner believes that the element called molybdenum was crucial for the primordial soup. When it gets highly oxidized it helps develop organic molecules, the first chemical reaction towards primitive forms of life.

A recent Martian meteorite study suggests that there was boron on Mars, another important element for the origin of life. So, the oxidized form of molybdenum should have been present as well. In addition, 4 billions years ago Earth was covered in water, and water is corrosive RNA, the first existence of genetic molecule. More than that, some of the Martian meteorites found on Earth are 4 billion years younger than previously estimated, so they could have been the carriers for molybdenum. These three facts seem to support the theory that makes Benner say: “We’re all Martians”.

The hypothesis proposed by the Professor resolves a paradox that puzzled scientists for years, since they’ve failed to create life forms in the laboratory using only organic matter and heat/light. In their attempt to recreate initial conditions from the Earth’s distant past, they skipped important elements like molybdenum. Without it, the compounds change into oil or asphalt like substances.

Steven’s theory was officially presented on Aug. 28 2013 at the annual Goldschmidt geochemistry conference in Florence, Italy.