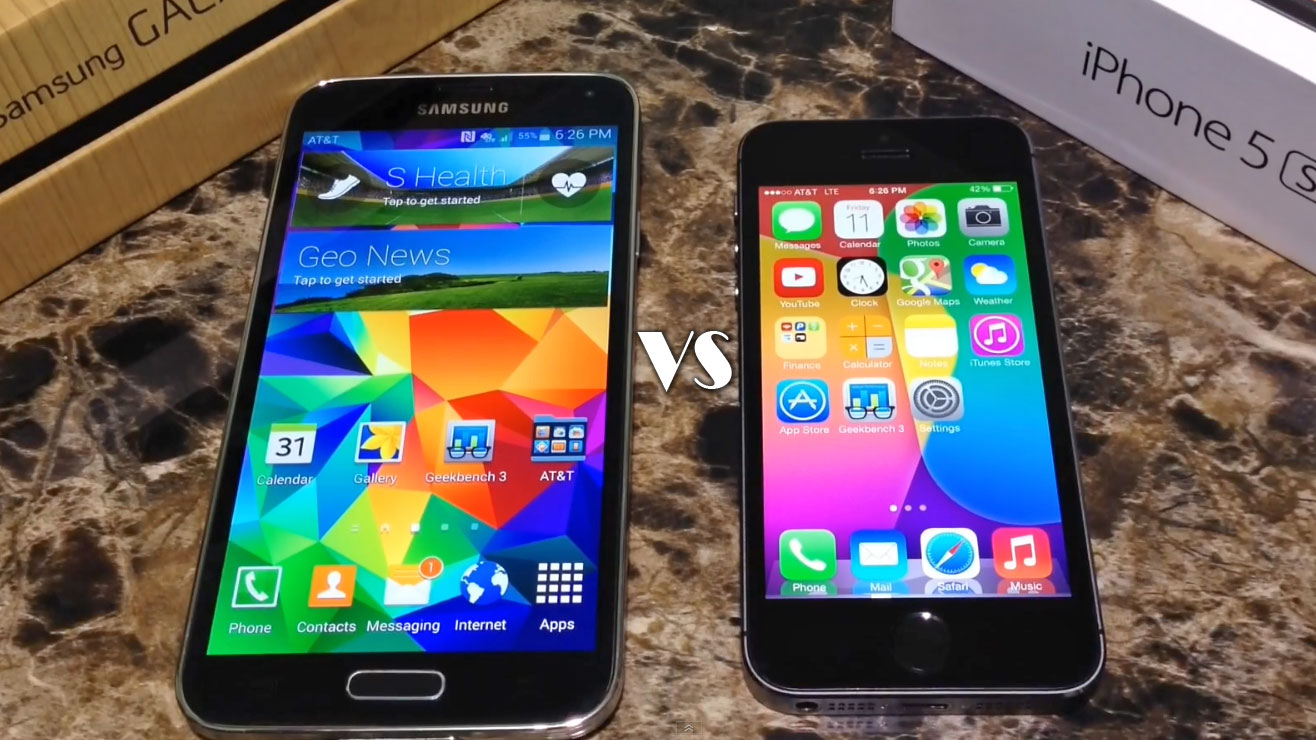 I want to let you know that I’m facing one of the most tremendous choices of my life: which top-notch smartphone to buy? If you read my blog for a while then you know that I’m meticulous about the news I share and that I love to take my time, to verify the sources and to provide real and untouched information to my readers. But when I have to choose a winner between two high-end devices that have great features and unparalleled performances, it’s almost impossible to be unbiased. So, here is my quick and subjective comparison between the Samsung Galaxy S5 and the iPhone 5S, a soft attempt to choose a winner between these two devices based on my current needs.

Although I’m using an older version of iPhone right now, I had the pleasure of testing for few weeks a larger smartphone (HTC One). Let me tell you this: having a larger device is great when you are at home or at the office, but when you are on the go and you move a lot, it’s difficult to operate such device with just one hand. That’s the case here. While the Samsung Galaxy S5 may provide a larger screen, it also provides a larger body, meaning that it will be a pain to carry it with you in your pocket or to use it when you need to be fast. On the other side, the iPhone offers the perfect one-hand-grab, and I’ve never had any problems using it with one hand while I’m on the move.

The S5 packs a larger display (5.1-inch) with better pixel density compared to iPhone’s 4-inch display. Even though I’ve always loved Apple’s Retina Display, I have to give this one to Samsung. The manufacturer packed one of the best displays on the market, and you will notice incredible colors that seem to pop up of the screen. Customers also love bigger displays and as a result, it seems that Apple will produce a future iPhone with a larger display.

On paper, the Galaxy S5 has superior features. In practice, both devices are great and you will not experience glitches or lags (although some users reported minor lags and problems on their S5). In the end, I guess it’s a matter of which operating system do you like more. I love the way you can customize the Android OS, but for me the iOS is definitely a winner.

I don’t know about you, but this little feature is really important for a photo-enthusiast like me. Again, on paper, the Galaxy S5 wins over the iPhone 5S with a 16 MP camera vs 8 MP camera. In reality, I was watching some camera comparisons, and although the S5’s camera captures images with higher resolution, the 5S captures better images. In terms of video, the S5 wins the round, since it has the possibility to capture 4K videos. Also, there are more image shooting options in the Galaxy’s menu compared to the simplistic menu found in the iPhone.

Have you noticed how every iPhone user is always asking for a charger? I know, the video above is not necessarily a definitive comparison test, but either way, Samsung will last longer than the iPhone in every battery test. And to be more exact, the Galaxy S5’s battery will get you through a full day of above-average usage. That’s something, right?

After watching multiple videos and after reading so many reviews, I incline to conclude that the iPhone 5S is the better device. Again, I will say that this small comparison was biased, and when I say that the 5S is better, I mean it’s better for me. I love the fact that it’s easier to use when I’m outside (since it’s smaller), I love its camera and ultimately, I think that the iOS has apps that are better for my business needs.

Which one is your favorite? Samsung Galaxy S5 or the iPhone 5S?