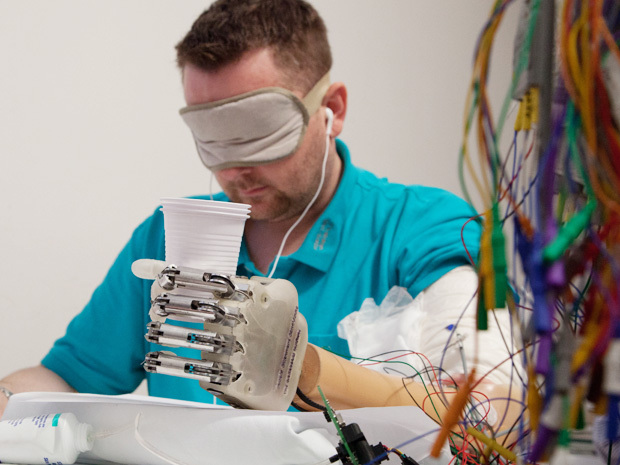 Dennis Aabo Sørensen is a man from Denmark that lost his left arm ten years ago in an accident involving fireworks. A group of scientists and engineers from Italy, Germany and Switzerland have provided an opportunity for him to test a bionic prosthesis that’s connected to the nerves in the upper arm, allowing him to feel what he is holding.

The international team of experts involved in this project included a number of specialists in robotics and their presence made ​​possible the implementation of the electronics and software that transmit real sensory feedback from the prosthesis to the body.

During the operation that was performed in Rome, Italy, electrodes were implanted in the peripheral nerves found in the upper arm of the patient. These electrodes were then connected to the artificial sensors that have been applied to the mobile fingers of the prosthesis. The sensors can detect and measure the information of the touched object and they can convert that information into electrical signals (using a specific algorithm) that are interpreted by the human nerves. In order to successfully cope with this operation, Sørensen spent a month performing laboratory tests that checked the functionality of the electrodes. After the surgery was successful and the bionic prosthesis was attached to the arm, he performed a blindfolded test: when he raised his first object with the bionic arm he could feel the hardness and the shape of the object . However, the bionic prosthesis is still a prototype and for the patient’s safety, the electrodes were removed.

In order to prepare for this operation, scientists made preliminary trials using the same methods on dead bodies and pics. This phase of the research allowed them to learn about the best method to implant the electrodes.

The next step of this research is to find a way to miniaturize the technology.  Scientists estimated that it will take about 10 years before such bionic prostheses could be available for amputees, and they will probably be quite expensive. But until then, they still need to make progress in developing a better prosthesis with sensors that can detect the texture and temperature.