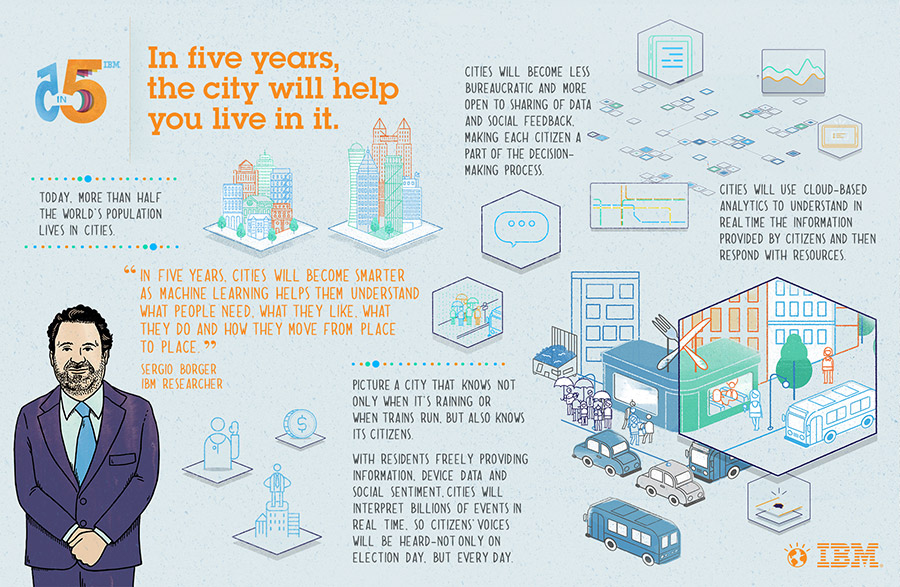 People are trying to make predictions about the future ever since the dark ages. Now, based on current tech trends, we can better understand where things are going and what the future holds for us. Each year, IBM is releasing their top 5 predictions about the near future technology and how we will interact with it. This time, the IBM scientists compiled the data on the enormous increase in computing power and the evolution of cognitive systems to create these predictions that may become reality in the next 5 years.

If we apply Moore’s Law, the computing power of computers should double every two years. That means by 2020 it’s possible to see computers smarter, more personalized and more able to interact with each other and with people.

Passwords will disappear
IBM predicts a future where identity theft is almost entirely eradicated. Computers will know who you are by observing your habits or tics and by analyzing the information from the environment. By the end of 2013 in the U.S. alone, over 12 million people were victims of identity theft.

The revenge of traditional stores
The battle between offline and online shops seems to have a winner, since most people love to make their purchases online. All this could change in the future, if the offline store owners will redefine the way they sell their merchandise.

Medical treatments will use DNA analysis
This is the most important evolution predicted by IBM. With the aging of the global population, the researchers expect that the rate of cancer incidence to explode up to 70%. The good news is that various types of cancer could be attacked at the DNA level, and treatments will be truly personalized.

Personalized school experience. No grades
Each pupil or student will get a fully customized learning experience. Just imagine a system that knows the student’s talents and its ability or inclination to learn certain topics. In addition, each student can learn in its own pace, thanks to applications and programs that can accommodate his cognitive capacities.

Cities will adapt to their citizens
It sounds good, but it may have a hidden cost. For this adjustment to happen, each urban citizen may need to be monitored and tracked. Just imagine a public transportation system that could be synced with our smartphones, allowing us to see everything on the maps. People could work from home using technologies like cloud sharing, high speed internet, streaming and computer security.