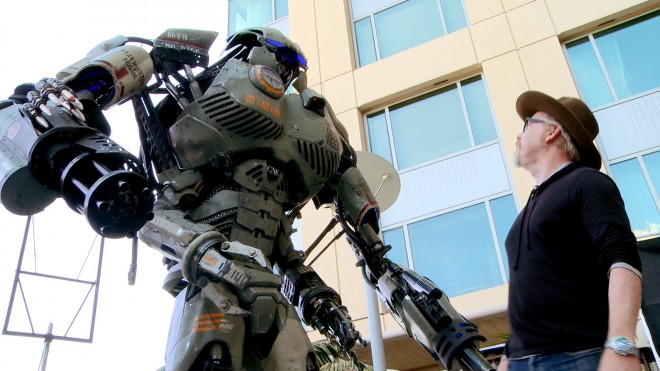 Bored by the same costumes presented at Comic-Con events, Wired.com decided to create something special for San Diego Comic Con 2013. Inspired by the just-released Pacific Rim movie, they’ve revealed the WIRED Mech, a Jaeger like robot that weights 400-pounds and measures 9.5 foot tall. This real-life robot was built by the same studio who built armors for Pacific Rim and Iron Man, the Stan Winston School and Legacy Effects.

The giant robot is made of aluminum and urethane materials, and it has an advanced control mechanism, just like the one used by the real Iron Man. In order to properly reveal WIRED Mech to the world, they’ve asked Adam Savage from Mythbusters to make a short introduction. After the unveiling, he was as shocked as I was when I saw the robot. It looks so realistic and menacing that I can instantly think of few practical jokes with it. If you find yourself at San Diego Comic Con 2013 you will probably see it patrolling in the area.

Wired will release a second video about how this real life robot was constructed in YouTube’s Geek Week (August 4th to 10th).